The Horror of Terror War In Perspective 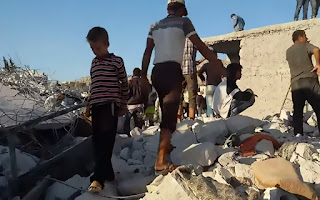 The horrific San Bernardino slaughter of innocents has dominated our news now for a couple of weeks.  And horrific it was, given the families devastated and communities moved to stark terror in our nation.  Presidential candidates are now stoking that bone-chilling terror.

This unjustified act by a seemingly quiet young California couple was the eighth of terror attacks  tied to sympathizers/supporters of Jihad  with ties to  foreign Islamic groups on our soil including 2001 and 9-11.  Eight.  Let that sink in.  It is a lot.  The toll of 25 innocent lives taken in San Bernardino bring the grand total on our soil to 3,270.  A fear inducing number for sure.

Now put these tragedies we have experienced on our soil in perspective to others resulting from what we Americans perceive as justified retaliation, excluding the endless war we launched in Afghanistan.   Take that in for a minute.  We'll now discuss retaliation which some characterize as actions to keep our homeland safe from other slaughters of American innocents.  Those not counted in the horrific cost of all lives lost resulting in our invasion and occupation of Afghanistan.

Let's first talk drone attacks we have initiated in Pakistan, Afghanistan and other African/middle eastern lands.  There have been 421 U.S. drone strikes through Dec. of 2015 from their origination several years back, starting with Bush and now continuing with Obama.  Human rights organizations have reported 5,700 civilians/non-combatants  killed and maimed by those attacks.  Let that soak in for a minute.

Nearly twice the body count of innocent civilians killed and maimed  on our soil by Jihad related
terrorists.  Not a bad ratio I presume in the mind of those seeking retribution.  Though experts are projecting that such drone killings aren't having much positive impact on our homeland security.

So, in terms of impact, let's now examine the results of bombings in Iraq and Syria, exclusive of our earlier Iraq invasion.  Here we are talking about 2014 and 2015, the so called air war against ISIL.

We have launched since inception 8,786 air strikes in Iraq and Syria.  Let that soak in, up to Dec. 7 2015, 8,786 air strikes.  Pretty big number, especially when compared to the 8 strikes including 9-11 forward on our soil.  Over a thousand times as many.  Do you see any significant impact on homeland security with that immense ratio difference?  Maybe it makes some of you feel safer.   Not me.

What have 8,786 air strikes in Iraq and Syria produced? CENTCOM estimates say about 20,000 ISIL warriors vaporized.   See any homeland security results here?  How about results on their land and victim acquisition there?  Not so much, eh?

Now, their victim count compared to ours at 3,270.  Civilians alone, not including ISIL warriors, stand at 2,104, according to Airwars.com, up through December 7, 2015 for the past two years. Over  three times as many of this total in 2015 to date compared to  2014 when the bombs started raining down on them.

So, drones plus bombs equals 7,804 civilians killed or maimed there compared to our 3,270.  Retribution seekers, how about that over two to one ratio in our favor?  Satisfied yet?  How about enhanced homeland security results?  Not so much, eh?  Attacks here seem to be escalating in recent months.

So, what then is the point of all this carnage?  Merry Christmas and Happy Hanukkah.