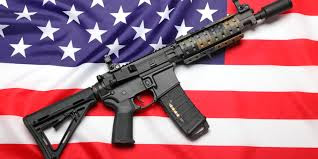 So, Orlando, here we go again.  In addition to the massacre of native populations by our ancestors, we Americans have now achieved a new milestone in our killing culture.  This is public madness achieving new heights exceeded only by our record as the only culture ever having used nuclear weapons on other human beings.  This is our killing culture and we are damned proud of it.

Little kids are given toy guns at the earliest age.  They are frequently seen in film cartoons.  Oh, it is only childhood fun we say.  Just stretching little imaginations.  TV shows and action adventure movies aimed at more adult populations, loaded with firearms and killing so to speak.

Gun shows, gun shops everywhere.  War movies galore, glorifying people discharging firearms and much, much more.  Oh, it is just fantasy we say.  Or story telling for amusement.  But the images of armed soldiers and cowboys are everywhere.  Video games with characters shooting one another?  Just more of a healthy fantasy outlet?  This is totally nuts.

Come on, people.  We display the killing culture everywhere from infancy onto decrepit old age in America.  2nd Amendment?  We fantasize that this translates into a basic human right to bear arms when the real historic intention of this language so obvious and so clear.   The reinterpretation of this Amendment is very recent in our history in the interest of maximizing our distorted sense of liberty and freedom to do whatever the hell we want to whomsoever we want.

This is a killing culture and we all know it.  But it is now time to put aside the fantasy and myth and address this madness.  We rolled back a perfectly reasonable automatic weapons ban not too many years ago in the interest of some whacked out sense of liberty.  Some actually think a brigade of patriots armed with AR 15's can save us from a tyrannical government armed with every conceivable form of weapon by land, sea and air.  Get real.  This is total fantasy.  Peddled by a twisted bunch of armed self appointed militia members and supported by a totally sold out Congress and a gun lobby loaded for bear.  Or is it bare?  It doesn't matter linguistically.  It matters financially to Congressional campaign coffers.

Yea, sure, sport shooting, target practice.  How the hell do you know how accurate you are when dozens of rounds shred your target with an AR 15.  This is a weapon of war.  Darts are a much more accurate measure of target accuracy.  This is a weapon designed not only to kill, but shred a human body.  It is a killing machine and you using them are a killing people.  Sick.  Disturbed.  Delusional and not in touch with humanity or reality.   A hunting weapon?  Oh, you say you do it for sport and the meat to consume.  But you know an animal doesn't have any sporting chance to get out alive.  And you know, if you spent any time thinking, that AR 15's shred a carcass and render it inedible.


We've been sold a fantasy, people.  Get your feet on the ground and heads screwed on and do a moment of thinking, not feeling.  We are killing one another.  Congress, it is way past time to restore some sanity and get us some gun control.  You are pledged to keep us safe.  This is not safe and you know it.  Yes, smart guns, thorough background checks, gun registration and ownership tracking and stiff penalties for not reporting change of ownership when you sell it to a similarly crazed buddy.  And for sure, banning of all automatic weapons of war.  Maybe even a requirement to keep semi automatic long guns and high capacity magazine revolvers registered and stored at the local National Guard Armory, not your hall closet.  And qualify and insure people for their use just like we are required to do with automobiles.  That seems reasonable, doesn't it?  Get on this people.