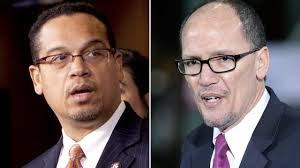 I was a Clinton supporter.  I loved Obama's administration.   I respect but kind of resent Bernie Sanders.  Not because I don't like his mostly very good ideas.  Not because he inspired youthful voters in our Party and nearly won the nomination.  My resentment flows from the fact that as a progressive of longstanding faithful to my party as a yellow dog Democratic, I didn't get done in my party what Bernie and his newbie supporters did.  They got it done.  They moved my party further to the left.  Not that they changed many minds within the party; they probably didn't.  But his persistence and issues, though an outsider Independent, he attracted lots of new young Democrats and inspired other not so new progressive Democrats to engage in the primary and the party's business.

Now with a leadership void with Obama's retirement, with Donna Brazile being compromised and with no party base spokesperson since November 9, Bernie filled the role and the media was fairly generous in giving him a platform, though he's once again an Independent. Yes, I kind of resent this role for him but at least we sort of have a voice until the DNC Chair election.

the Chair contest has been good for the party.  There are lots of good ideas coming from various candidates for this position, most with good experience at the state party and local levels.  In particular, the Mayor from Indiana with his articulation and understanding of issues/values framing should speak loudly to all the other candidates who still do not get this communications strategy.  It is so well executed by Republicans and so poorly executed by Democrats as all levels in spite of about 12  years of framing/linguistic experts trying unsuccessfully to teach the party how to communicate.

In my opinion, it is a toss up as to who can do a better job and inspire our brethren, Ellison or Perez.
Both have strengths in different needed areas and both are role models for really important groups in our coalition.   If I were voting, I lean toward Perez, though I have some unanswered questions as to how he might use Jeremy Bird's field organizing firm (of Obama '08 fame) who are running his DNC campaign; I am concerned about creating a shadow party through them, competing for volunteers and money rather than the indigenous party rebuilding of neighborhood organizations so desperately needed.  If they are hired to assist in rebuilding our grassroots party organization at local levels, I'm good with that.

But it is time for pragmatism.  This party need the energy and youth of the Bernie team.  And their ideas about economic justice and reform.  We Clintonistas simply must put our resentments aside and territorialism and make room for this new invigorating energy.  Yes, they need guidance from those of us who have worked in the organizing trenches of the party and I hope we offer it and they welcome it.  That will be the job of the new DNC Chair.

So, DNC voting members, give Keith a shot.   If Perez wins this job,  team Bernie , set aside your resentment and bring your organizing energy into his party administration and you will have power and voice. Our very democracy is at stake.
Posted by stan merriman at 9:14 AM