SCOTUS Has a Central Role in American Corporate Fascism

Mystal cites Robert's leading the court to reducing the role of the Federal Government in protecting voting rights often restricted by States through the 2013 Shelby V. Holder decision overturning the requirement of States with a history of voter discrimination to protect voting rights.

Robert's prior political and legal history had a pattern of racism in his chosen work on public policy, in the tradition of two other modern Republican icons, Pat Buchanan and Newton Gingrich., completing the circle of all of the three Federal Branches led by Republicans in their day in this dreadful discrimination.  Republicans have a log history of promoting an apartheid, white nationalist America, post Lincoln and the short lived so called reconstruction era. This discriminatory behavior is also recognized in their Federalist and Heritage societies also dedicated to advancing white control of government. This is all about Corporate dominance of our economic and social systems.

This core value of Republican political leadership is at the root of their support of so called States Rights and  their longstanding work to diminish Federal authority over our States, excepting the Federal role in National Defense and low Federal taxation, particularly of the wealthy and corporations.

Mystal argues that the 15th amendment has not been enough voter protection; it requires detailed statutory law to be enforceable. Thus our need for the recently failed voter protection the Republicans, in total fascist fashion, shot down with the help of two DINO Dems.

As is the practice of Fascists across the globe historically, Republicans have focused their efforts on restricting rights, such as those for Women's choice as well as voting rights and as Mystal observes, maintaining white American  and Corporate dominance in the social order and politics.  Corporate dominance over government and public policy I would add.

They have done this with favorable treatment in taxation for the wealthy to preserve their wealth, authoritarian policies from the Executive branch, discriminatory legislation favoring the white wealthy citizens at all levels of governance from the Legislative branch and favorable treatment of the Corporate and wealthy classes in areas of criminal and economic justice.

To not recognize these practices as fascism is to not read or understand both world and American history.  I find the majority of my fellow white American's just do not chose to understand this reality of our life here through willful ignorance.

A significant influence on America's flirtation with fascism is Corporate America. In the 1930's major Corporate leaders were harsh critics of the Roosevelt initiatives to dig America out of a Corporate caused depression via casino capitalism, generating fear that these remedies to the collapse of the economy would lead to communism.  This was repeated in the 1950's and now again in the early 2000's.

Some of these Corporations went on before and during WWII  with trade with fascist Germany with slight of hand initiatives to conceal their betrayal of the American people.  This included aiding and abetting U.S. money supporting manufacture of tools of war in Europe covered up with a shell game.

Further, Corporate America initiated complicity with support of central American authoritarian government leaders who collaborated with them in economic initiatives in their countries.  America's shameful history with our own authoritarian take over of economies and ultimately governance of Hawaii and Puerto Rico for the sake of Corporate profit.

American citizens' apathy toward their own citizenship and responsibility to maintain democracy has enabled authoritarianism as the economy reigns supreme over self government.  America has advanced itself through get rich quick schemes over increasing freedom and self governance schemes.

This in my view explains the current crisis to maintain our union.  We are led by economic predators who have attached themselves to Republicans and Wall Street Democrats.

Our way out of this is reform of our Corporate regulatory policy and emphasis on domestic economic cooperation over competition evidenced  by our emphasis on education to further economic advancement rather than enlightened citizenship and improvement of lives for all of us, not just the chosen few.  This is how we have wound up with a hand full of billionaires calling our shots, not patriots advancing democracy over autocracy. Racism is fueled by our economic need to foster an underclass in service to white nationalists, the privileged class in America who advance a theory of our genetic superiority to motivate the white underclass to support the advancement of the predatory privileged few. 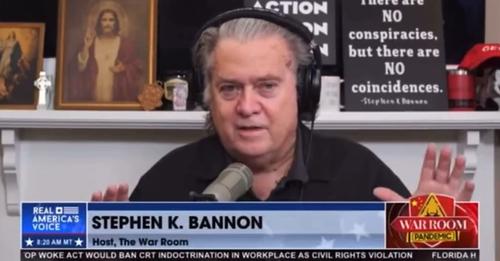 Note the appeal to Christians behind Bannon over his right shoulder.  Christianity in service to fascism. Germany and Italy showed these predators how it's done.

Posted by stan merriman at 9:47 AM