The Church That Prides Itself In Not Changing 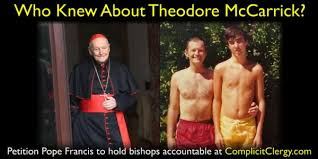 I was once a Roman Catholic.  That ended many decades ago.  But not without trying to change it.  I left a Church that, after working several years with a fantastic group of Catholic reformers called the National Association of Laity, prides itself in claiming it has not changed over the centuries.   This work spanned the 60's into the early 70's.  We busted our butts in our local parishes and also with the national hierarchy to institute changes like women priests, birth control and family planning and married clergy.  This was the brief era of Pope John xxiii and the Second Vatican Council. We worked on wealth transparency for the people of the Church, for them to better understand the enormous power of their Church expressed in wealth.  Our theory was, if we could expose the truth here, we could disarm some of the Church's autocratic power over its flock.

Among our projects was to convey to our fellow parishioners our organizational support for the newly announced Roe v. Wade decision empowering women with their own bodies.  We were 100,000 strong across the U.S. and we had the clout to be heard.  We shook the foundation of both the conservative and liberal wings of the American Catholic Church.

Another project was for a team of us, at our own personal expense, to fly around the country and meet with Bishops and convince them during this time of Church upheaval and hope for change that by revealing the investment and real estate wealth of the American Church, they would show transparency to the flock and engender more dedication to the good works of the Church.  Better still, if they would divest of some of that wealth and provide greater assistance to people in need, they could enhance respect for their work and show that they were earning their tax exemption.

After several years of these meetings, we actually succeeded in opening up the balance sheets of every diocese of the country, published in media reports and newspapers all across the U.S.  We were sure we were on our way to other major reforms.  Transparency was the key message that propelled us.  Oh, how wrong we were.

In a few short years the local flocks, the sheep as it were, showed they really didn't give a rats ass.  All they cared about was their own redemption and the good feeling of forgiveness for their sins the Church offered them if they were good sheep.  Good sheep didn't speak out.  Didn't question. Didn't get in the business of the Church. Transparency didn't really matter as long as their personal needs were met.  This, coupled with conservative Church leadership reversing the modest reforms that liberals initiated killed the movement for change.  Transparency died along with our loss of John xxiii.  I made the decision in the early 70's that this was not a community of faith I found worthy of my time or service.  To this day my departure was one of the best decisions I've every made.

Little did our reformist group know that all the while, behind the scenes,  Priests were molesting and raping children of both genders, and on occasional discovery were quietly transferred to other parishes.  The really egregious cases were shipped to South America or off to other lands to prey on children there.   The Bishops we thought we were dealing with in good faith were covering up these horrific abuses people's humanity in the interest of protecting the reputation of their beloved Holy Mother Church, not the interests of the faithful they were claiming to serve.

Decades later, in he early 2000's, while volunteering for a progressive public radio station in Houston, I met a victim of abuse who had served as an alter boy.  I, like many, had been reading of cases of pedophilia and sexual abuse going public around the country.  Meeting this severely damaged person gave me the idea that my Houston-Galveston diocese was not any different from Boston, or Chicago or other parts of the country as related to this Church scandal.  My diocese, or rather, that of my Catholic friends was just not yet exposed.   I felt I could make at least a small difference.

Through this brave victim of my former Church led me to a half dozen other such victims he knew and a very low publicity group called SNAP.  They had banded together to address both the legal and the public remedies needed to end the abuse of others.  Through these contacts I was able to produce a series of radio programs giving voice to a range of sexual victims of Priests and complicit Bishops in the Church leadership in that area.

That radio project and the voices and stories of betrayal and victimization they told has never left me. So, when I read about the recently announced huge expose in Pennsylvania involving at least 300 priests and over 1,000 victims of these predators,  I felt the need to write this blog.  Here is an exerpt of an interview with the attorney in PA who started uncovering this massive abuse.

Serbin is also disappointed with the Vatican’s response, which came two full days after the damning report from Pennsylvania was released. “Three popes have been involved in overseeing this [scandal] since I started. I really think they are as much responsible as each of the bishops and church leaders in the States,” he says. “They knew there were serious problems. They knew children were being harmed for life. They knew families were being torn apart. Some of these child predators were so perverted, and I don’t know how any decent human being, not only a member of a religious organization, could look at this other than with disgust.  And this still shocks me to this day. This should never happen again. And these bishops and church leaders, these heads should roll.”,

Here we are, decades into a massive coverup, hearing of it again.  Though the Church has paid a big price in selling off many of those real estate holdings the NAL and my colleagues managed to get revealed to the faithful , it is  not nearly enough to heal the wounds of the good people damaged for the rest of their lives.

Posted by stan merriman at 8:19 AM