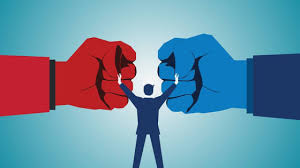 Our system as a democratic republic has been deeply dismantled by the Republican Party and President Donald Trump.  Those of you who claim allegiance to this Party as a voter clearly have no concept of the damage your leaders have done.  All you care about is your tax rate.  You have not raised your voice in objection to the abandonment of the rule of law and practice of norms required to maintain a democracy.  Here’s what you have endorsed and now personally own.


You have abandoned the norm of bipartisanship in governance.  You have enabled the idea of “to the victor go the spoils” rather than humbly and practically enabling the functioning of a Loyal Opposition to share in power and legislation. America, get this truth.....we would not have this democracy if our founders had not managed to put aside arrogance and egos and strike compromise in order to create our Constitution.  This is historic fact.  There were as many ideas about how our democratic experiment should work as there were with the many founders.

You have accepted the idea that when you win an election majority,  you have earned the right to absolute domination of your right wing policies and the minority Party has completely lost its role in power sharing and ability to strike compromises.  Ironically, you accuse left wing advocates of authoritarian rule.

This unprecedented Republican policy is embodied in Leader McConnell’s pronouncement at Obama’s election that his mission and that of his party was to make him a one term president.  This meant and was implemented by a policy of blocking as many of his legislative initiatives as possible.  The most egregious example was his blocking of Obama’s Supreme Court nomination hearings.  He shut the process down completely.   And Speaker Ryan began the process of trying to dismantle, rather than improve Democratic and President Obama initiatives such as the Affordable Care Act.  Endless resolutions to end it ensued for years. You and your leaders are responsible for the very gridlock you claim to abhor.

A close examination of the recent Democratic administrations of both Wm. J. Clinton and Barrack Obama reveals repeated efforts at striking bipartisan deals on legislation and inclusion of both Republicans and conservatism in their Executive Administrations as well as an openness to both Republican and conservative Judicial appointments.  Examples: Clinton’s “Third Way” budget policy and movement to smaller government; Obama’s adoption of Republican created and tested healthcare reform.  Both supported Republican and conservative jurists to bench appointments.

Why should I care about this?  It does not affect my daily life, so what?
There is nothing in the Constitution requiring bipartisanship.  But, from the successful adoption of a protracted effort to adopt our Constitution, our founders found it necessary to compromise personal ideologies in order to successfully create our great democratic experiment.  This became a necessary norm to successfully govern a nation with many differing political beliefs and ideas.   It has proven to be necessary in order to perform even the most rudimentary tasks of governance for 250 years.  It has resulted in our democracy lasting so far 250 years.

But bi-partisanship began eroding with the advent of the Republican Tea Party in the early 2000’s, progressing to near total gridlock under the Ryan and McConnell leaderships of both houses.

This affects your daily life with such matters as the wages your earn guided by neglected minimum wage standards and the treatment you receive from your employer, your health insurance premium and co-pay increases or your inability to access healthcare via Medicaid,  the stability of your Social Security insurance system you pay into every payday, federal assistance to your public school district to improve your child’s education, the tuition you pay  for your child’s higher education, the many services you receive from Federal sources and the tax rate you pay.  And the security you enjoy resulting from our relationships with other nations and adversaries around the world.   These are just a few examples of the impact of the disappearance of bi-partisanship.

Until you begin to understand the rudiments of both norms and the rule of law necessary to maintain democracy,  you will continue to lead us into the authoritarian governing model you and your ignorant leader Donald Trump have now taken us to.  You will hear more from me about your clueless (or is it intentional?) march into fascism now recognized by most social and political scholars.
Posted by stan merriman at 11:50 AM