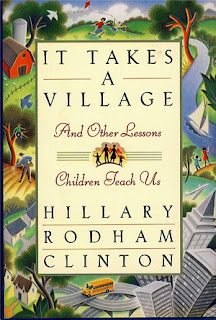 The 2016 Campaign embodies the classical American conflict between Liberalism and Conservatism, Democratic values vs. Libertarian values.  This is really nothing new.  It's just louder and more extreme today than perhaps yesteryear's conflicts and political contests.

On the domestic front  the Trump version of Republicanism is nearly identical to the Gary Johnson version of Libertarianism.  The only difference of consequence is that Johnson is less crass, less noisy and less bombastic.

Those shared values, in contrast to Liberalism and the Democratic Party's values, are about me, myself and I.  I, me and mine.  This strain of Americanism is all about rugged individualism.  I'll take care of mine, you take care of yours.  We have heard it every day, thanks to a lapdog media from Trump.  How great he is.  How wonderful his family is.  How beautiful the women in his life are.  And how he knows how to "make America great again" just like he and his family are.  Greatly wealthy.  Greatly successful.  Greatly white.  Greatly smart and really good at helping themselves at the trough of life,  taking as much as possible.  Woe is the business associate who gets in Trump's way or threatens his bottom line.  Ruthless is good because it helps me and mine.  Greed is good as expropriated from the Reagan era.  This is just the Reagan era on steroids.  You're on your own out there, buddy, good luck.  But don't get in my way.

Read Atlas Shrugged.  Listen to Paul Ryan.  Hear Ron Paul and his Senator son.  It is the same tune, different singers.  Gary Johnson is the soft Irish tenor of the song; Trump the heavy metal version.
Johnson-government with a soft touch on our lives, letting us do it our way, regardless of public/social consequence.  Keeping the immigrants in line so as to not interfere.  Weed is OK, very appealing to the millennials.  Let the market do its thing without a cleanup crew following behind, this kind of stuff.
Trump is just more harsh, more intemperate, with chest beating and loud bellowing.

The people this message and life-vision appeals to are those who see themselves as captains of their own ship, owing no one for their success or failure, loyal to their family members who they see as their only responsibility.  If they experience failure, it is usually a government or government policy to blame, not themselves.  They take care of  themselves and their own and deplore those whose performance in that area is less than theirs.   If others fail then they're usually deserving of their failure.  Thus worthy of being cut loose or disenfranchised, lesser beings.

Now contrast that with the first major Party nominee who is a woman who authored a book entitled It Takes a Village.  In spite of being vilified for decades for being a liberal, a bleeding heart liberal who endured a humiliation on a massive scale before the world by her spouse and summoned the energy and self confidence to write this amazing book to share with her countrymen.  This book and this woman of many imperfections (like all of us) gives us the core message of her life.  And the core message of her political tribe, the Democrats.  Both are about taking care of oneself, taking care of one's family but also making a life which shares its abundance and grief with the village, the village of the United States of America.

This is the core difference between Democrats and Republicans.  The core difference between liberalism and conservatism and Libertarianism.   Some times liberalism is expressed this way...."we are all in this together." In my view, and if you have heart, you view this as the glue that binds a workable society.  The alternative is dog eat dog.  Here are a couple of examples:  Some in our society are excluded because of race.  Some among the excluded adopt a dog eat dog lifestyle out of desperation and rejection, shooting it out on the streets in drug deals gone bad.  This is nothing more than Libertarianism taken to a Trump extreme.  Or, as I so well remember in my first trip in Mexico in the 60's, affluent people living behind concrete walls and electrified iron gates to keep out the rabble.  American developers adopted this lifestyle in the Reagan era.....they called them gated communities.
Or in rural areas,  people who buy acreage surrounding theirs to prevent neighbors from being too close.  It is the same mindset.   People preferring to go it alone, without the village.  This is their right.

But when things go wrong, it is usually the village who comes to their rescue.  So they too ultimately reap the benefit of the village but don't pay the price by contributing back to the village.  These are the people who do not volunteer, do not run for office or work in political campaigns.  They isolate.  Many do not vote.   Or if they do--that is all they do in the political order.  And if all they do is vote, they make a big deal out of the lousy choices they had. But they'd done nothing to put forth better candidates in the village.  Usually their excuse is that they are too busy taking care of their own.

So the contrast and choice is really clear for me.  A perfect village? Of course not.  A mayor of the village with imperfections?  Sure.  A village idiot here and there?  Sure.  But it beats living it out on an island or behind a really big wall alone, in my humble opinion.