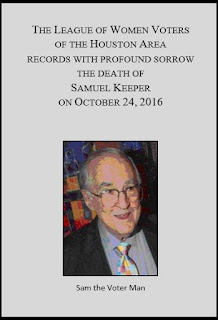 Sam Keeper left us on October 24.  But he didn't leave us empty handed.  He left a legacy of commitment to truth and justice and improving the human condition.  He endured unimaginably horrific pain in his last year or so but with his beloved spouse Cele at his side, and bedside, he showed us how to celebrate life.

Sam spoke to me years ago about his interest in the Hemlock Society and thoughts that someday he might wish to be in personal control of the end of  his life.  I am certain that his abiding, passionate and sweet love for his spouse of 67 years steered him away from that course, letting nature and hospice take its course to give them as much time together as possible.  This was a great love few of us will experience.

Sam was brilliant, certainly at the gifted level.  He majored in Physics and wound up supporting his family through journalism and public relations.  Sam was renowned for his mentorship of communications professionals; three come to my mind, all with brilliant careers resulting from Sam's care and feeding; Ward White, Helen Vollmer and Steve Barnhill, all at one point in Houston with Sam.  These are some of the communication industry superstars as a result of Sam's work with them.   A minor league player compared to these three, I owe much of my ad career to Sam's help.  I am grateful beyond words;  my offspring I hope are as well. As a result of my successful career, Mary Kaye and I were able to give them a pretty good start.

Sam was fluent in Spanish as well as his native tongue.  He read in that language constantly and engaged speakers in conversation to hone his spoken skills.  He was a brilliant writer and an even more incredible communications and PR strategist.   I had the privilege of working with him on countless projects and can attest to his amazing talents in that area.  He took his own firm and two major communications companies to the top of their fields with his management skills.

But my most compelling critique of Sam's work in life was the community and political service he lent his talents to.  He was an early adopter of sophisticated information technology  and brought those skills, even as a very senior citizen, to fundraising, political campaigns, voter registration. All at a scale only a few can claim to have equaled, civil rights movements and social reform causes successful only because of his professional gifts and grit.

I know of some of these first hand working side by side with Sam.  Through our work and reform through Citizens For Good Schools, we accomplished HISD integration and defeated a public school breakaway effort by racists trying to create the Westheimer Independent School District.  Sam helped defeat the Wallace and Tory Democrats and led takeover of the Texas Democratic Party by progressives.  He led massive voter registration drives with decades of work with the League of Women Voters.  He worked toward mental health reform in Harris County and Texas.  He assisted minority voter registration and mobilization of that vote for the Democratic Party.
Sam pushed fundraising for the party and its candidates.  The list goes on, including major work with the Houston Grand Opera, The Houston Symphony, the Houston Chamber of Commerce.  Houston owes Sam so much for helping make it a major league urban center.

But all of this work, professional and civic, pales by comparison to his loving skills as a spouse, father and family member.  He adored his family as the centerpiece of his life.  Sam was charming, prickly, challenging, kind, loving and always caring about justice and repairing injustice.  He was doggedly determined, relentless in his pursuit of successful completion of a project and tireless in his endeavors to do what was right.

Thank you, Sam for bringing so much to my life and seldom letting me rest when you consistently outpaced me on things we were doing together.    I'll relish our time together for the remainder of my life.  I loved you so.
Posted by stan merriman at 12:56 PM