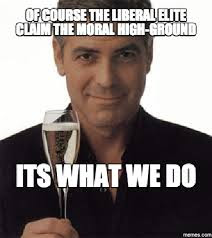 Well, now Bernie has declared Liberal Elites as the problem within the Democratic Party, somehow blocking a forward path for less/fortunate, less financially successful non- elites and apparently non-liberals by definition.   I respectfully beg to differ, Bernie.  You damn well know things are more nuanced than that.  They can be smug and self righteous, but they can also be right and a necessity for a successful Democratic coalition.

If anything, Liberal Elites represent a potential model within the Democratic Party to strive and achieve for so called working class and lower income people.  Are we given to believe that by diminishing the influence and status of Liberal Elites, somehow others can be elevated?  Why not a co-equal, democratic partnership to move society forward?  I think so.

Methinks, Bernie you've got Democratic Party policy confused with Republican Party policy and governance in all four categories.  The meaningful stuff in the Party Platform you helped shape benefits my caste a lot more than Clooney's.  Do they get tax breaks I might not get due to my much more restricted income sources and stream?  Likely yes, but I don't hear our Liberal Elites screaming for tax breaks.  I hear many of them saying they'd happily pay more, but we, you and Democrats have not recently controlled tax policy, the Republican Elites have and do.

Look, it is stupid to diminish the Liberal Elite's role in the party; there is plenty of room.  Mostly they raise money for us, a tragic necessity until we fix our corrupt campaign and political financing system.  I do not hear them demanding don't fix it because they love writing checks.   Together we can figure out how to at least limit the corrupting influence of  political $$$$.  But in the meantime, they are helping pay the rent.    A bigger challenge is how to divert California money to the California Party so we can build it in neighborhoods where us lessers live and work.  Texas money to the Texas State and their County Party organizations.  That is where the Party building future is.  I want Clooney's money to go to the LA County Democratic Party is, or wherever he lives.  Into year around  store front Democratic Community Centers helping non-voters with their problems and needs.......earning their trust and confidence we can actually get stuff done for them to earn their vote and loyalty.

To rebuild this party in a way you and I both want, Bernie, we are going to need a lot of money.....year round and the fantastic small donor program you created is not nearly enough.  Properly paid community organizers (from the working class), store fronts, technology and communications tools all will  take a massive investment over maybe a 5-10 year period to reach those unengaged but  amenable to our values and goals for us all, plus maintain and nurture our base.  It is also going to take a lot of volunteer time, of which C,D and E level Liberal Elites have more access to than many working class fellow Democrats.  And a lot of developed talent of which these Liberal Elites also have demonstrated gifts.  Again, co-equal members of the team with each coalition member category contributing their part to make progress.

Here is what I've experienced with more years than you, Bernie, as a grassroots, maybe D list  local Liberal Elite.....45+ years in mostly the Texas Democratic Party.  The acknowledged best liberal organizer in Texas in the 50's through the 70's was the legendary Billie Carr.  She was working class and without financial resources, so over the years she was sustained with personal financing by Liberal Elites....several of them, to allow her to work nearly full time in Party reform and organizing.  Her work and our successes in overthrowing Tory Democrats from ruling our party and later chasing the Wallace people off was only enabled by the Liberal Elite funding and middle class grassroots organizing.  The last Presidential success in Texas, Jimmy Carter, was enabled by the generosity of a State Party Chair, a small town banker with big bucks.  He built a unified party by traveling all over that huge state in his private charter plane, kicking County Chairs in the ass to mobilize successfully.  His work enabled the election of huge contributors to social justice in Congress like Barbara Jordan, Mickey Leland and Craig Washington, our first black congresspersons.    His money and generosity made them possible.  Financial angels, all Liberal Elites maintained the Texas Democratic Party for decades, enabling successes before racism took hold with Republican rule with statewide offices.  But their money has enabled all of the urban centers in Texas to hold Blue.  Their money,  augmented by trial lawyers and labor funds made the difference. I suspect the same is true with most other states.   The Party Chair for an 8 year stretch in one of the largest counties in the USA I had the privilege to volunteer with became a Liberal Elite after years of practicing civil rights law while also volunteering for liberal Democrat campaigns in our area.  When his success and earned wealth permitted, he gave every waking hour to leading our party to success, with interspersed failures.  He worked for nothing, took heat for being Elite, gave enormous quantities of time and money to the benefit of those of us in the party without such resources, enabling us to do successful grassroots organizing.

In the current era, historic female political pioneer Sissy Farenthold just successfully mentored Harris County's first African American Ann Bennett to become their County Tax Assessor Collector/Voter Registrar.  Sissy came from some family privilege but as a Liberal Elite, gave time, talent and funding to elevate working class folks to leadership roles.  Same was true of many others I knew of the privileged class who looked beyond themselves to help others achieve their potential.  I worked in this environment first hand and I never saw the "corrupting influence" of these Liberal Elites....and sat in meetings and while I heard their suggestions as the checks were being handed over to the Party, never once in decades of such experience did I see controlling influence from the Liberal Elites.  Your revolution, which I support, fails to recognize that it takes money we lessers cannot provide to enable a powerful grassroots party.  Yes, we need the Liberal Elites money but we also need their altruism, talent and creativity generously provided, mostly without strings attached.

That isn't to say my experience is the total picture in our national, state and county party organizations, but I'd wager it is typical.  Yes, there is likely both unwise control from the donor class as well as some corruption.  That is fixable.  It is much more fixable than chasing the Liberal Elites off when they've been working the vineyards for years to help those striving for upward mobility and some of the rewards of both good luck and hard work.  This would leave us with a Party which the hard pressed and beleaguered among us, for the most part, with rare exception, do not have the time and resources to rebuild.  This task takes machine operators as well as machine oil.

Let's not have class warfare within our party.....let's make war with Republicans and Fascist Trumpites.   I've learned through years of grassroots Party organizing that it is the currently upwardly mobile, aspiring grade C, D and E Liberal Elites who do much of the shoe leather work at the local party level.  Why?  Because they are Liberals who have at least a few hours to give to party building,  meeting organizing, block walking and phone banking.   Usually it is those folks whose kids are old enough to be left alone or to bring along and who have the disposable income and mobility to spare a few hours a week in volunteer work with the Party.  And who is it they are motivated to help and lift up?  Not themselves or their families but those with fewer personal resources.  Working class people  with talent, intelligence and goodwill to make life better for all.

I have learned from hard earned personal experience that expecting lower income folks, often with hourly jobs and no benefits to turn out for a meeting or a blockwalk project after leaving their 2nd job workplace is unrealistic.  Sure invite them, but don't expect performance when they are needed elsewhere to help their families.  It is for them that both we more fortunate lessers and the Liberal Elite work to improve policy and secure government support where needed.

Bernie, let's have a party which includes all of us who share the same values and aspiration for economic and social justice.  Each making a contribution in our own way to benefit all of us.  Let me repeat,  I am not writing off the working class.  Some, maybe half, should be written off as racist, misogynist  and homophobic and hopelessly bigoted.  These are the people or their parents who rushed to the exits in the days of civic and party integration and escaped to the exurbs.  They couldn't beat it out of town fast enough.  Enough of them.  But the other half of this working class group, particularly in the rust belt, may be salvageable.  But the huge potential lies with the unengaged non-voters in the urban and suburban centers.   They need to be shown lots of love, tangible help on their kitchen table and shared values.