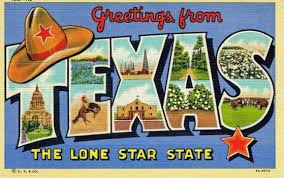 Inspired by my Julie's writing today about her family history in Texas and her journey, like her ancestors, to a new place, I am reminded of my own native San Franciscan journey to over half my life in Texas.

My first encounter with real Texans on moving there was being taken by a couple of work mates to the restaurant in Richmond, Texas with the world's best enchiladas, really just a road house.  Then, following dinner, to a dance hall to learn how to two step.  Northern California is not known for enchiladas or two stepping.  We thought of ourselves as entirely too hip.  But what a joy.  And our friendship with these great people led us to trips with them and their UT loyalists to Mexico and the discovery of cabrito and Ramus Gin Fizzes.

We found Texas, and particularly Houston to be people country.  You couldn't go to a restaurant, church or a bar without having strangers come up to you and say "Hey, y'all, how are you?"  And of course, they went onto to discover who we were and from where we had come to settle in Texas.  Just like them.

The friendly factor is undisputed.  I had by then lived in Maryland, DC, northern Virginia, southwest Virginia, Chicago and Minnesota as well as my native land, California.  Lots of friendliness most everywhere, varying by degrees but simply nothing like Texas.

And local culture of such diversity I cannot begin to describe the variety.  Texas redneck culture,  Cajun culture, black Gulf Coast culture, Mexican American culture and lots of middle eastern culture from the oil industry in southeast Texas.  Touches of southern hospitality and openness blended with pioneer southwestern individuality.  And plenty of midwestern and northeast ethnic cultural traditions.  And a thriving, respected Jewish community in Houston going way back in local history.

Incredible natural beauty from Big Bend, the Hill Country to the Piney Woods. The gulf coast? Did I mention food?  Tex-Mex, BBQ beyond compare, Gulf seafood, Chicken Fried Steak and Cajun delights. Did I mention unique Texas music?  Bob Wills and Pappy Selph and Texas swing?  So much going for it.  So much to experience.

I am so grateful for this melting pot experience in my life.  After a two year promotion and transfer to very blond and white Salt Lake City, we could not wait to move back to Texas, with our first border crossing meal moving home being BBQ from an amazing roadside stand.  We felt incomplete without the ethnic diversity of Houston and celebrated our return.  This was home and this was the America we cherished.

But now the enigma part.  Soon we discovered  deeply imbedded racism among a diverse population.  Some of it from rural bred Texans and some of it from transplants from highly urbanized white Philadelphia.  A strange mix but much of it had its source in these two groups for us. It manifested in demeaning racial references in conversations only matched by the racism I found while living in southwest Virginia and which I had never experienced in northern California. Back in suburban Houston, it manifested in demeaning references to "n-word loving liberals" in our neighborhood from parents and their children alike.  For some of these racists, this is who we were in our neighborhood as our racial and political views became known.  And our family was not shy about revealing who we were.

The most virulent  racism revealed itself to us when we engaged in the public school integration movement.  It was offset by the amazing cohesion we experienced with fellow integrationists of every ethnic background when we overthrew a segregationist school board.  Liberals around us were fierce, brilliant and undaunted by the task of dismantling segregation so our kids would grow up knowing the joys of ethnic diversity and mutual support.

But as our Texas experience progressed and we experienced success with others in moving the Texas Democratic Party to the left and expelling the racists to find a home in the Bush Republican Party, we did not envision the future backlash would foist upon us.

For a wonderful period in Texas politics, in the 70''s we had a liberal renaissance era.  A highly diverse coalition of Black, Hispanic, Anglo liberal and feminist politicians led our State with amazing skill and idealism.  Roe v. Wade was made possible by a feminist Democratic lawyer/legislator.  Robin Hood funding of impoverished public schools happened with this coalition.  Environmental protections against oil industry abuses emerged.  A rainbow of political leaders stood side by side and created policy and an atmosphere of mutual respect, tolerance and lots of love.  Think Texas and you think Sam Rayburn, Jim Wright, LBJ, Barbara Jordan, Mickey Leland and of course Molly Ivins and politics and amazing governance.

The Reagan backlash and a rebuilt, racist Bush Republican party ended this era.  Liberals became anathema.   Civic engagement was replaced with rugged individualism and an I got mine, go screw yourself conservatism.  Ann Richards managed to reverse the tide, but the forces of regressive policies marshaled their power and money to end the reign of enlightenment.

Enlightenment was replaced by mean spirited political leadership in Texas bent on neutering progressive policies and looting the public treasury.   Contrast mean spirited Greg Abbott and Dan Patrick with the Texas political leaders listed earlier.   Laissez faire capitalism and the rule by wealth prevails today in Texas.   Texas starting in the 80's was very much  the laboratory testing for the Oligarchic Fascism which reigns in the nation's capital today.

So, it was not hard to leave the Texian culture as a result.  The tepid, weak knee liberalism of Delaware has been an adjustment compared to the fierce, warrior liberalism fighting its way back in Texas but it is an improvement for me.  I have a fem-warrior spouse to inspire me daily in my new life.

And I carry with me the memories of the cultural Texas I much prefer over the political Texas.
And the satisfaction that I was able to fiercely fight for justice and equity along with some amazing Texas liberal warriors.