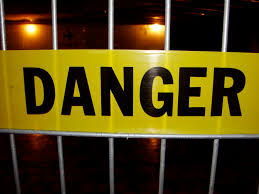 Donald Trump is a clear and present danger to the security, safety and stability of our country.   Here I am referring to his conduct of foreign policy, without a policy and without consent of his Party, my Party or the American people writ large. His domestic issues leadership is a subject for future blogs.

I will not regurgitate all of the above to you in the interest of brevity.  Even you Authoritarian fascists electing and supporting him can find an abundance of misstatements, threatening rhetoric, insults in his demeanor and words with foreign leaders.  Behaviors which destabilize relationships with allies and now former allies as well as competitors, which you fascists regard as standing up for America.  The public record and google can supply an immense inventory of these thoughtless events in the past 90 days.

He's alienated the U.K., Germany, NATO and the EU and our neighbor, Mexico.  He's insulted them without provocation.  He has committed boorish behavior with foreign allies such as Germany and Mexico.    He has terrified South Korea, Japan and we really don't know about China, because no transparency was offered regarding the content or results of their leadership visit last week.  He and his Secretary of State have met with foreign leaders without media transparency, causing us to read foreign press to find out what he and they are doing and saying to one another.

Most alarming of all, in the space of a week he has bombed Syria and mega bombed Afghanistan with virtual carte blanche given to his military commanders so as to not interrupt his golfing schedule.  And increased ground troop commitments in both Iraq and Syria and perhaps Afghanistan without advice and consent of Congress or media transparency.  And simultaneously Trump has threatened Iran regarding what he views as a bad deal with them and questioned their long term nuclear intentions without evidence or information.  Quite a week of international hostility.

Oh, wait, maybe the foregoing was not the most alarming.  Maybe most alarming was his sabre rattling and naval armada misstatements without being informed by his Navy of what was actually going on in the waters off North Korea.  We citizens are given to speculate as to who is more crazy, Kim Jong Un  or Donald Trump.  We do know from his words that he is equally ia verbal bully with that Dear Leader with the bad haircut.  Wait, they both have bad haircuts.  I'm talking about the North  Korean haircut.  This event, still ongoing, is terrifying if you are paying any attention.

In single days he's enunciated one tactic or another and then been contradicted by his press secretary, Secretaries of State and Defense and U.N. Representative.

Someone wrote and I agree, this is the first time since as a kid I was told to protect myself from an nuclear blast by curling up under my wooden desk at school that I have felt terror when bedding down at night, not knowing if WWIII was beginning the next morning.

I referred to clear and present danger Trump represents in the top of this article.  Ironically, these words had their origins in a Supreme Court case in the early 1900's referring to anti-war activists accused of posing a threat to our nation with their criticism of efforts to gear up for WWI.  I hope you see the irony in my accusing our utterly unhinged, chaotic and ill informed President failing in his attempt to bring his version of business style leadership to our terrified populace.  His supporters are terrified by people of color threatening their privilege.  His detractors, like me, are terrified by his lack of judgement and absence of advisers to compensate for that deficit and mental/emotional stability to understand  the world the rest of us live in.

I fear for us.  This must end.  Ending eventually is not a reasonable option.  It must end now.

Posted by stan merriman at 8:43 AM