Democrats Need To Do Their Work On Main Street 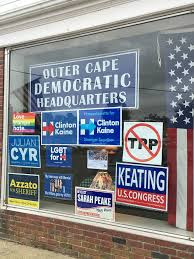 I am generally moved by Matt Taibbi's writing in Rolling Stone.  This time he's missed it.  He thinks messaging is the solution.  To some degree he's right, we need great improvement here to win, but its source and targets must improve massively along with the content.

By source I mean Democrats need to rely on main street messengers, right in our neighborhoods.  Messengers from the DNC, DCCC and DSCC are all well and good.  But the most impactful messengers are your Democratic neighbors and local neighborhood organizers.  There is solid research to prove this and a massive body of history of local Democratic party success.  The organizers used to be called, maybe somewhat disparagingly Ward Healers.

Ok, don't use that term, but you get the idea.  The local people representing the party that serve the base and party build with the unengaged.  Forget the Deplorables.  Nearly half the electorate don't participate in Presidential elections, and more don't participate in local elections.   Ward Healers did it by offering a hand in solving local problems.... in tandem with local Democrat elected officials. .Mundane stuff but hugely important to the much discussed working class we're criticized for neglecting.  Help networking for a new job; getting trash collected, landlord disputes, bus line changes, a closed feed store in rural country, local tax collection issues.  These kinds of things that impact the daily lives of people.  This is where the Ward Healers got their voteser  Helping people out with the mundane but critically important to the working families the party talks so much about.  This is where we get the new blood for our party.

This is where you build loyalty and a sense of value in peoples lives, not TV and internet ads, twitter feeds and DNC press conferences.   Yes these latter things are useful, but they are tools to put in the hands of local organizers to reach people, reach into their lives and their hearts.  And it is needed not just during campaign cycles, but 24/7/365 in your neighborhood.   In the local vernacular, dialect and cultural ethos.

Communications experts have well proven that word of mouth information (and disinformation) is the ultimate goal of any external communications to people.  Stuff that gets passed along at local barber shops, bars and grocery stores.  And this is where the Democratic party has eroded its influence, excepting in some select urban neighborhoods in Chicago, New York and Atlanta.  Republicans have perfected it is rural and ex-urban America.  You might note it works really well for them out there.  They get tremendous turnout.

The so called consultant experts have no concept of this or the ultimate power of word of mouth, the ultimate driver of results, affinity, loyalty and voter turnout when the chips are down.

Messaging needs to be local, localized as well as national and nationalized.   Democrats need to think of the rank and file as their sales force.  This is where the difference is made.  This is where we lost those 70,000 votes in Wisconsin, Michigan and Pennsylvania.   Not in the fancy models of the techies running Hillary and the DNC's campaigns in 2016.  And this is where Trump trumped us.  He recognized it and what did he do.....had rallies to energize the great unwashed.  Rallies that were talked about before they were held and long after the stadiums and gyms emptied.  Local stuff, organized by local people. You need to get this people.  This is how you win school board elections, property tax referendums, justice of the peace campaigns and local county commissioner races.

Peer pressure and peer support is what "Better Together" should have meant, not some vague notion of kumbaya on a theoretical level of a better society. The blame of our failure is mostly owned at the local party level, not the DNC. It was the local party leadership that let the neighborhood organizations wither and failed to build a local bench of party volunteer to keep it going.  Yes, DNC money can help.  Yes, we might need to find some money to pay neighborhood organizers.   It can help a lot, along with some DNC training expertise and skill sharing.

But yes Virginia, all politics is local and we've forgotten that.  Matt, you're too taken with the national level messaging as our major deficiency.  We need to rebuild local neighborhood messengers.  The lack of messengers in the neighborhoods is the major deficiency.  A party dealing with the mundane, daily problem solving in peoples lives will bring value and loyalty and deflect some of our really disturbing racism and racial/economic resentment that we have to work around to move people in a direction that they perceive will improve their lives.
Posted by stan merriman at 9:02 AM